Hard money and the gerontocracy 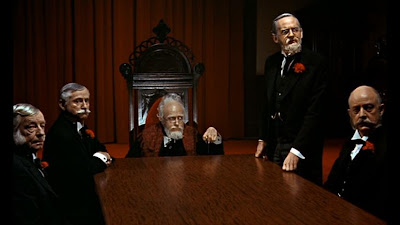 There is a huge divide between economists and the rest of the populace when it comes to inflation. Economists generally focus purely on the efficiency/growth effects of inflation - whether monetary easing can boost output, etc. Most normal people ignore this issue entirely, and mistakenly equate "inflation" with "falling real wages" (which is absurd, but 99% of people seem to make this mistake). But then there are lots of people who seem to care about the redistributive effects of inflation. These effects are real, and potentially big, and economists often ignore them.

Who loses from inflation? "Net nominal lenders". These are people who own a lot of non-inflation-adjusted bonds, and not a lot of stocks, and who get less of their income from wages. Who are these people? They are old people.

Owning lots of bonds, and not much stock, is the wise thing to do when you're old. Stocks are riskier than bonds, and old people can't afford to take as much risk - this is the core idea of "life-cycle investing". Also, obviously, old people have a lot of savings (and hence a lot of income from investments), and not much in the way of wage income. So old people tend to be hurt by unanticipated inflation, while young people are generally helped.

That is the basic idea behind this new paper by Jim Bullard, Carlos Garriga, and Christopher Waller of the St. Louis Fed. they make a model (basically, a variant on the simple old "overlapping generations" model) in which the government wants to please its citizens, but can't enact Social Security or other methods of income transfer. Instead, the government uses inflation to help whichever group has the heftiest demographic weight. If the country's population is tilted toward the elderly, deflation is used to maximize social welfare; if there's a baby boom on, inflation is the most utilitarian policy.

OK, so how does this toy model connect to the real world? In the real world, we are perfectly able to do things like Social Security, so we don't need to use inflation/deflation to redistribute between the young and the old. But in the real world, different age groups may use the political process to skew monetary policy anyway. Or as Bullard et al. put it:

In this paper, we have allowed [our math model] to “stand in ”for the political processes that society uses to make decisions concerning redistributional policy...

[S]ociety could use other [policies] to achieve similar goals, so we interpret the …findings here as...taking the existing distortionary tax system as fixed and immutable.

Furthermore, they contend, the broad patterns of inflation and deflation seem to follow the age structures of developed countries. Consider the cases of the U.S. and Japan: 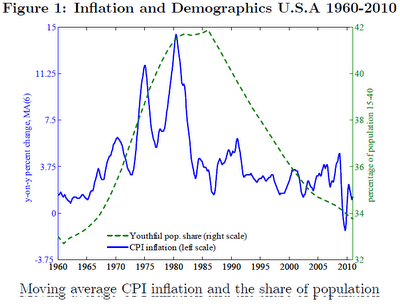 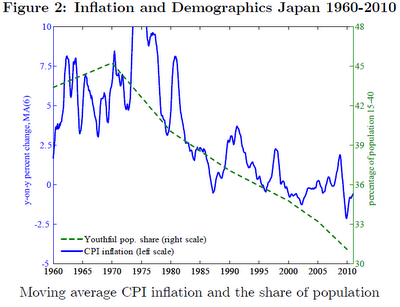 Now, for this to be what's really going on, old people must exert some sort of control over the Fed. We typically think of the Fed as independent, apolitical, and technocratic - not the type of institution that would be swayed by the selfish desires of one cohort of the population to extract rents from its descendants. But who knows; maybe the legendary political strength of the elderly somehow filters through to the brain of the Fed chairman.

And if that's true, it means that elderly countries will have a much harder time fighting recessions. If old people's desire for the redistributive benefits of low inflation overwhelms the need for the Fed to boost growth, then we're going to have a much tougher time ending our current stagnation...to say nothing of Japan, where hard money is much more of a cult even than here in the States, and which has been mired in near-deflation for decades.

So next time you throw up your hands and wonder why the Fed isn't doing more to boost the economy, remember Jim Bullard's paper...it might be all Grandma and Grandpa's fault!
Author: Noah Smith Posted at 9:05 PM