How many economists are monetarists? 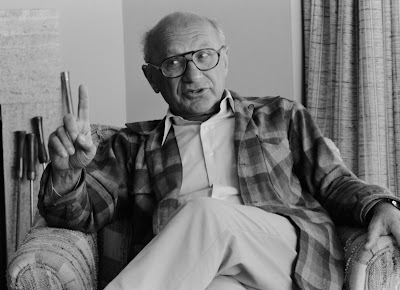 Reading the econ blogosphere and talking to macroeconomists, you would think that the monetarists have triumphed. With the coming of QE3, the hard-money faction has suffered a decisive defeat in the policy arena. Mike Woodford is being hailed as a hero for our times, and the notable resemblance of QE3 to NGDP targeting has won Scott Sumner many accolades as well. Monetarism - broadly, the notion that economic fluctuations should be stabilized entirely through the monetary policy of an independent central bank - appears in the ascendance.

Except that the rest of the economics profession has apparently not gotten the message. The Economist has conducted a survey of economists from various walks of life - the NBER, business economists, and "independents". The question: What has been holding back America's recovery from the Great Recession? And here, in two pretty graphs, are the answers: 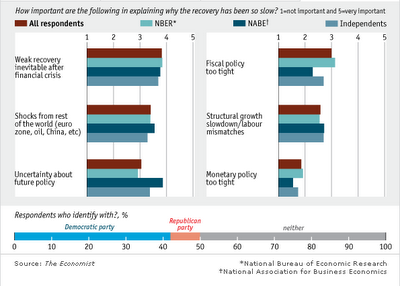 Basically, we see the following facts:

1. Most of these economists believe that slow recoveries are a natural result of financial crises.

2. The "policy uncertainty" trope has a good number of followers, despite the fact that there is probably substantial (and entirely political/partisan) disagreement as to what sort of policies people are worried about (socialist Obamacare, crazy Republican debt brinksmanship, or just a general failure of America's political institutions?).

3. A lot of economists seem to believe in fiscal stimulus.

4. Most economists do not think that monetary policy has been a big factor in the slow recovery.

All of these results are interesting, but to me, the last one is huge. Milton Friedman claimed that the Fed caused the Great Depression by keeping monetary policy too tight. Ben Bernanke agreed with this view. This survey shows that most economists (or, at least, most of those surveyed; it was not a random sample of the profession) now think that Milton Friedman was utterly wrong.

This seems like a big deal to me because it signals a general lack of confidence in macroeconomics as a field. In recent years, most mainstream academic macro has modeled recessions as being due to demand shocks, and has focused on monetary policy as the most appropriate - or indeed the only - policy countermeasure. Fiscal stimulus is such a distant second that it might as well be running in a different race. Monetary policy - optimal rules, targets, expectations management - was and is considered the..er...gold standard of what macro has to offer the world in terms of practical, applicable engineering. What this survey shows is that many economists believe that our best macroeconomic policy engineers are unable to build any sort of useful machine.

How would I respond if I took this survey? Basically, I agree that there is probably some force that holds back recoveries after financial crises (and we don't entirely understand what that force is, though many think it's related to gross indebtedness). And I think that uncertainty about external shocks is a huge deal - I wouldn't be surprised if there were "ringing" or "boomerang" effects as the crisis filtered slowly around the world and back. Also, I think we could have given the economy a much bigger boost by doing a lot more road and bridge repair. So except for the "policy uncertainty" part, I agree with the majority or surveyed economists.

And monetary policy? It's hard to say. It's not a topic I understand well, despite having taken classes on it and read a fair number of papers. I'm not sure it's a topic that more than a handful of people understand well, given the propensity of respected monetary policymakers to say such odd things (and such different things over time). I'm still open to the idea that better monetary policy could have had us back on our feet in a jiffy after 2009, but I'm definitely far from convinced...
Author: Noah Smith Posted at 4:03 PM