Will Abe address Japan's number one problem after all? 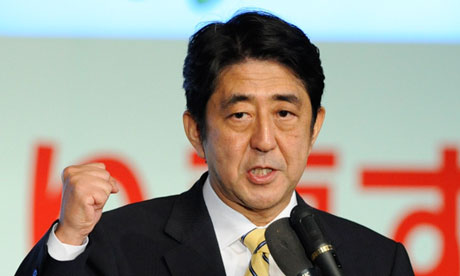 First Abe surprised me by actually following through with his monetary policy promises; he appointed Haruhiko Kuroda to the BOJ, and together they are embarking on the most ambitious attempt at "reflation" ever tried by a central bank. It remains to be seen if this will actually work, of course; Japan remains mired in deflation even after the announcement, casting further doubt on the effectiveness of the "expectations channel" of monetary policy. But Abe is trying, and that is the important thing.

Now, Abe is talking about an issue that I think is far more important than monetary policy - and one which I had even less hope that he would address. I'm referring to the status of women in the Japanese economy.

One of the essential things that differentiates Japan's economy from ours is that in Japan, women still form an economic underclass. Japan's labor market has an infamous "two-tiered" structure, in which there are two kinds of workers: "Real workers" and "contract workers". The former have (theoretically) lifetime employment guarantees, guaranteed yearly raises, bonuses, and full benefits, with the possibility of promotion to top management. The latter have low, stagnant salaries, few benefits, few guarantees, and little if any possibility of promotion. The former are mostly men. The latter are mostly women.

Not only is this a tremendous waste of talent, it discourages women from entering the workforce. For this reason, most Japanese mothers quit work when they have kids, and working Japanese women tend to have few kids. In addition to holding down Japan's GDP, this is often cited as one cause of Japan's low fertility rate.

Many of Japan's peculiarities seem less peculiar once you know this fact. For example, Japan's unemployment rate is famously low. But Japan's labor force participation rate is even lower than ours. Women make up much of the difference (teenagers and early forced retirees make up the rest).

Anyway, it has long been known that women's exclusion from the Japanese corporate system is one of the main things holding back Japan. In addition to boosting U.S. total GDP by getting more people into the formal workforce, women's increased economic equality has thought to have boosted American productivity by quite a lot. Japan has received no such boost. Pretty much everyone knows that Japan needs to make women more equal; everyone from Aung San Suu Kyi to the U.S. Embassy to the IMF harps on the point. A thousand articles have been written on the topic, but not much has changed.

Why has not much changed? Japan's protected economy, heavily subsidized "zombie" companies, and weak corporate governance insulate it from the Beckerian free market forces that probably helped advance gender equality in the U.S. in the 80s and 90s. In the absence of such market pressures, the most proven route to gender equality is the Swedish/French route, in which the government basically just tells companies "Thou shalt hire and promote women." This method has proven successful in those highly regulated, somewhat protected European countries.

However, Japan's politics has long been dominated not by France/Sweden-type social democrats, but by arch-conservatives. These arch-conservatives made their home in the long-reigning Liberal Democratic Party, which ruled uninterrupted for 55 years and squelched most efforts at social reform. Nobusuke Kishi, the founder of the LDP and its most important leader, was Shinzo Abe's grandfather.

During Abe's first term, he appeared entirely uninterested in addressing the problems of women's equality. His foreign minister and right-hand man was the late Shoichi Nakagawa, who once said:


"Women have their proper place: they should be womanly...They have their own abilities and these should be fully exercised, for example in flower arranging, sewing, or cooking. It's not a matter of good or bad, but we need to accept reality that men and women are genetically different."

So you can see why I have been skeptical about Abe's commitment to women's equality.

However, Abe may surprise me again. According to all reports, Abe is contemplating a big push to put more women in corporate boardrooms:

More details are expected in June, when the government is to unveil a “national growth strategy” of deregulation measures and other structural changes designed to make the economy more dynamic.

Just by saying this, Abe has surprised me, actually. But given his party's strongly sexist traditions, it is far too soon to declare a revolution. As he did with monetary policy, Abe must convince me with dramatic, unprecedented, massive action...and more importantly, he must convince Japan itself.

But if he does...then Abe will have outdone even his predecessor and patron, Junichiro Koizumi...and maybe even his own grandfather as well.
Author: Noah Smith Posted at 4:46 PM