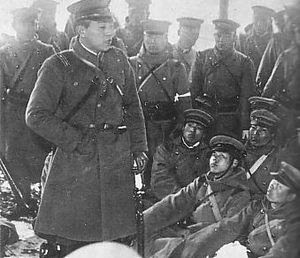 "Gekokujo" (下克上) is a Japanese word meaning "low overcoming high". It refers to when the people lower down in a hierarchy rise up and overthrow those above them. Rebellions, mutinies, and populist uprisings are all gekokujo. The word was often used in conjunction with coup attempts by lower-level military officers in the years before WW2. Japan, it turns out, is a lot less hierarchical - or at least, obedient - of a place than people think.

One culture I know that is very hierarchical is the econ profession. It has a centralized job market. Academic hiring is heavily weighted toward candidates from top departments. And it's sort of an open secret that old, famous professors can essentially publish whatever they want in top journals, which gives these old famous people enormous clout.

As in most academic fields, publishing in one of a few top journals is key to career advancement. But in recent years, more and more top-journal publishing has been dominated by one single journal: the American Economic Review: 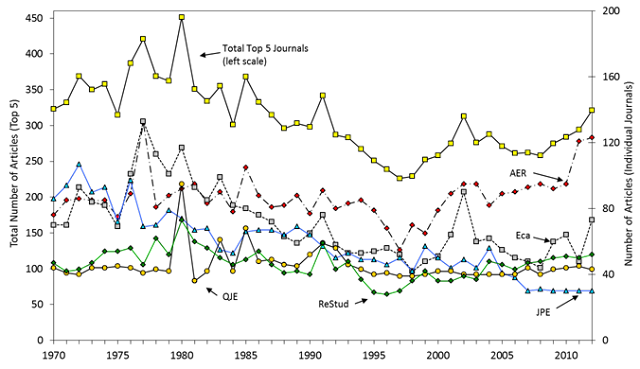 In econ, the standards for what constitutes good research and what constitutes bad research are less clear than in the natural sciences (though far clearer than in the humanities). That adds to the suspicion among the lower ranks of the profession - grad students, younger profs, profs and students from lower-ranked departments, etc. - that successful economists got where they are by sucking up to old famous people. "It's a sleazy profession," a young and talented assistant prof once confided to me, over a beer. "I'd advise you to get out of it." (I ended up taking his advice.)

Almost everyone except EJMR regulars despises EJMR. The site has a fair amount of the sexism and other aggression so common on anonymous internet forums (it's been called "4chan for economists", which in my opinion is a bit of an insult to 4chan's creativity and sense of humor), but that can't account for the near-universal visceral hatred that most economists feel toward the place. Most people who tell me how much they hate EJMR talk about what one PhD student called its "insecurities, careerism, and insane status and hierarchy obsession." Essentially, EJMR vacillates between slavish worship and bitter disdain for the top people and organizations in the profession. These people deeply believe that they need to suck up to the big dogs to get the brass ring, and even though they go along with it - econ jobs, with their high salary, lucrative consulting gigs, and intellectual prestige, tend to be a pretty nice brass ring - they don't like having to do it. So if econ is going to have an equivalent of the gung-ho young Japanese officers who launched repeated coup attempts in the 1930s, it stands to reason they'd come from EJMR.

It also stands to reason that the target of the uprising would be the AER, one of the profession's most important gatekeepers. So I was hardly surprised to see a publication scandal involving EJMR and the AER. Essentially, EJMR people started accusing an AER editor of 1) favoritism and bias, and 2) overlooked citations. These are typical academic sore points, and of course this dispute obey's Sayre's Law. But I also see it as a proxy for a wider dissatisfaction with the centralized, hierarchical, and somewhat arbitrary nature of a lucrative and prestigious profession.

There's a possible political angle here too, though I don't want to play it up too much. The AER editor being accused of favoritism, and the young authors accused of being the beneficiaries, are all women. The paper is a reduced-form empirical paper of the type that is taking over more and more of econ publishing. And the paper's policy conclusions are that unemployment is bad and that poverty could be transmitted from generation to generation by mechanisms other than genetic ability.

Like Japanese army officers in the 1930s, EJMR people tend to be right-leaning types in addition to careerists. The few times I could bring myself to read EJMR, I always saw a combination of A) disdain for political liberalism, B) disdain toward "reg monkeys" (a pejorative term for economists who do reduced form empirics), and C) bitterness toward women in general and toward allegations of sexism in the econ profession. It seems possible to me that many smart young conservative men were drawn to study economics, attracted by its traditional support for free markets and its traditional skew toward the male demographic - but that when they arrived, they found a profession increasingly tilted toward the left, increasingly populated by women, and increasingly accepting of the use of reduced-form regressions that can easily be interpreted as making a case for government intervention. George Borjas, who came out in support of the rebels, is certainly known to lean pretty strongly to the political right. This episode of EJMR gekokujo might be part of a more general backlash against these trends by angry young conservative men who feel that the econ elite, by favoring women and/or liberal politics, is depriving them of their just desserts.

Or not. That was just a thought I had, and it seemed kind of interesting, so I wrote it down. Don't take these musings of mine as any kind of evidence that left-right politics or gender politics is actually involved. But whatever the larger political context (or lack thereof), it clearly seems to me like a case of econ's "bottom feeders" (as one top economist called EJMR's denizens) rising up against the masters of their lucrative, prestigious little universe. I wouldn't be surprised to see more such "incidents", as Japanese history politely refers to them.

Regarding the sexism thing, someone sent me the following screenshot from an EJMR thread discussing this post:

I don't think this kind of thinking totally dominates EJMR, and I don't know how much it's motivating this particular uproar. But I do think there's a fair amount of it there, which is why I mentioned it. It's also why I didn't try to comment on the merits of the case...I don't like pseudo-corruption and favoritism, and it certainly seems like a pervasive problem in econ, but I'm also pretty wary of joining what might turn out to be a sexist witch hunt...

Also, check out some interesting comments from someone claiming to be a recent job candidate. He or she raises a great point, which is that in the age of empirical economics, data access is really important, and that many young and/or struggling economists are mad about top institutions getting preferential early access to data. Early access allows simple, easy analyses - which many non-top economists are perfectly capable of doing - to get published in top journals, because the data is novel. That, argues the commenter, is causing a lot of anger in the lower ranks of the profession, some of which might be getting displaced as anger against perceived nepotism (which is actually a different issue). That rings true to me, and I will definitely follow up on the data access issue...
Author: Noah Smith Posted at 6:07 PM