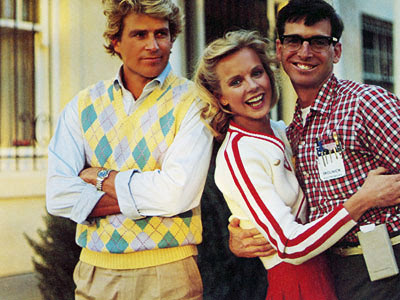 Every field of study has its own peculiar conventions of how "very smart people" are supposed to act. If you're in physics, you should have unkempt hair, juggle or do some other unusual hobby, be sexually promiscuous, and try to make your intellectual achievements look effortless (i.e. you should do a Feynman or Einstein impression). If you're in computer science you should talk like a character out of a Neal Stephenson novel, use hacker jargon, and know every XKCD joke by heart. If you're in math, you should either act genuinely crazy (like Grothendieck or Perelman) or very soft-spoken and mild (like Fefferman or Tao) - i.e., you should convey the impression that you have a lot of very powerful software running in the background of your brain. I'm not sure what biologists act like, but it seems to include wearing a goofy grin all the time.

But all of these disciplines share some common markers of nerdiness. One of these is enthusiasm for new technologies. Another is a love of - appropriately enough - science fiction. the "gee whiz" attitude is an integral part of being a science nerd.

Economics is different. Very few economists read a lot of sci-fi (or, at least, are reluctant to admit it openly). At social gatherings, economists tend to discuss sports, politics, and money rather than augmented reality or driverless cars. They tend to be better-dressed and better-coiffed than natural scientists. In other words, they are a little bit like MBAs. In this way, economists show that they are about Business; that they are worthy of consulting gigs and Congressional testimony.

But economists can't be just like MBAs; they have to also show that they are Smart as well as Business. But if you can't show you're smart by quoting Vernor Vinge and gushing about Augmented Reality glasses,  what are you supposed to do?

Answer: Act like you have mild Asperger's. Don't pump people's hands when you encounter them at the AEA Meeting; stand there awkwardly as if you're not sure whether to shake their hand or not (then finally shake it). When discussing economics, pepper your explanations with excess formalism: instead of saying "figure out how the business cycle works," say "examine the joint time series properties of macroeconomic variables." Instead of "mean and variance," say "moments of interest." Talk...very...slowly...with...random...long... ... ... ...pauses. Drop the occasional politically incorrect comment, and then pretend you didn't realize you did it and apologize sincerely. If all else fails, start wearing Hawaiian shirts and make your hairstyle a combination of fauxhawk and mullet (OK, just kidding, don't do that).

But for Milton Friedman's sake, don't be a science nerd! If someone references Star Trek or Mass Effect, give them the hairy eyeball. Remember, "technology" has nothing to do with semiconductors or machine learning or General Relativity; "technology" is the Solow Residual! Economists evaluate technology from on high; we do not descend into the muck of knowing how it actually works. And remember: you do math well, but you don't like math, not for it's own sake. Do not gush about all the cool difficult math you just did, whine about it.

OK, OK, I joke. But man, I wish that the economics profession would let loose its inner geek once in a while! Face it economists: you do math, stats, and coding for a living. It's too late; you are a nerd. You are not a backslapping deal-making executive or a trash-talking caffeine-guzzling Goldman Sachs trader. You are a scientist of some sort, or at least you should be. Embrace it! Watch Fringe. Grow your hair out. Learn to juggle.

Actually, I see some encouraging signs of a move toward nerdiness in the econ profession. Bloggers like Tyler Cowen, Karl Smith, and Robin Hanson are beginning to gush about the Next Big Thing in technology (while Brad DeLong regularly quotes all my favorite sci-fi authors). When he taught my macro field class, Miles Kimball kicked it off by talking about how in 100 years we'd all be cyborgs (a more optimistic variation on Keynes' quote about the Long Run).

Think about it. We are living in the Age of the Nerd. Economics is one of the last places where being a geek is not yet sexy. But the times, they are a-changin'. Live long and prosper.
Author: Noah Smith Posted at 3:10 PM